This question is often asked, not only by those who are starting their reading and research into healthier foods, but by almost everyone at some point who actually stops and thinks about their food. This exact question has been the center of debate between the chemical and biological or sustainable agriculture communities for some years now. Those with large advertising budgets have spent dump truck loads of cash selling the public on the idea that there is no difference between spraying a custom mixed chemical slurry onto the soil and using compost, re-mineralization, green manures, proper crop rotation and building the soil health biologically. In fact, the advertising has sold the public and many farmers that the biological method is simply a waste of time and money. We are beginning to know better now.

The large Agribusiness companies are surprised and a little bit worried at the steady double digit growth of local and organic farming, and the reasoned, educated and dedicated support of that agricultural model through Farmer’s Markets, CSA’s, community gardening and farm shares. It can’t be ignored or brushed aside any more.  Many think that the Food Safety Modernization Act- S.510- is a large scale effort to seriously hamper the growth of  local biological agriculture. While a very small percentage of the total market share, the growth of local agriculture has the industry giants concerned, because if only 5-7 percent of the current market departed, that would mean losses in the tens of millions of dollars for them. That is completely unacceptable for the corporations, and their shareholders that control modern Agribusiness.

We wanted to present an article from one who is recognized as being quite knowledgeable in the field. From a basis of formal education leading to real world advisory positions in policy making governmental departments, she has the foundational knowledge to be able to speak authoritatively on the subject. Her own experiences as an award winning organic grain farmer who also educates others how to produce abundance without the chemicals now thought to be essential to successful large scale agriculture uniquely qualifies her to be able to speak on both sides of this question.

Acres USA originally published this article, and is used here from their Reprint Archives. This is a long article, and will be broken up into two successive segments. Our comments and notes will be included at the end of the article.

Mary-Howell Martens is admired and recognized as one of the nation’s pioneering leaders in sustainable agriculture.

Together with her husband Klaas, Ms. Martens owns and operates Lakeview Organic Grain in Penn Yan, New York, one of the Northeast’s largest and most successful organic grain businesses.  Started in 1991, the Martens’ 1400-acre farm and feed mill, which they work with their children Peter, Elizabeth, and Daniel, and 10 employees, currently supplies organic feed and seed to over 300 organic livestock farmers in New York and Pennsylvania.

Noted for her wide-ranging efforts to promote sustainable agriculture, Ms. Martens is equally revered throughout the industry for her innovation, leadership, and stewardship.  She  received the prestigious Patrick Madden Award for Sustainable Agriculture in 2008, and has testified before the United States House of Representatives.  She and her husband speak throughout the  United States and Canada on sustainable agriculture and have written many articles on the subject.

Is organic food more nutritious or better tasting than conventionally produced food? This is a question that many people are asking, but unfortunately, there is no simple answer. So much more is involved in the nutritional quality of food than simply comparing organic versus chemical agronomic practices. There is certainly quite a bit of incorrect information, confusion, and wishful thinking on both sides concerning this subject, and probably there is as much variation in food quality produced on different organic farms as there is in the quality of food produced on different conventional farms.

Many people do believe that they can taste a difference between organic and nonorganic food. I usually think I can, but that might be because organic food is often fresher and more likely to be locally produced. Margaret Wittenberg, of Whole Foods Inc., says that in their stores, when customers ask whether organic foods are more nutritious, the company policy is to say that there is no evidence to say that this is true. However, she says that many customers remain unphased with this answer due to their own experiences and perceptions.

Some animals apparently can detect a difference in organic crops by taste. Floyd Hoover, in Penn Yan, New York, grows organic corn. One night he left several ears of conventional and organic corn side by side in his barn. The next morning, the organic corn had been nibbled by mice while the conventional corn had been ignored. Floyd then rearranged the order of the cobs, but still the mice avoided the conventional corn. Finally, he hid the organic corn, but the mice refused to touch the conventional corn. Within a few nights, the mice found the hidden organic corn and had a feast. Anecdotal evidence such as this indicate that for many people and apparently animals too, detectable quality differences do exist. Scientifically, however, it is difficult to draw definitive comparisons about the nutritional quality of conventional and organic food. Many environmental factors influence the nutritional quality and flavor of any type of farm product, including soil type, soil moisture, soil microbial activity, weather and other climatic conditions. Cultural practices, such as crop variety, seed source, length of growing season, irrigation, fertilization, cultivation, and post-harvest handling, will also affect food quality.

There have been few studies that directly contrast the chemistry of conventional food to organic food. Research reported in the Journal of Applied Nutrition showed that on a per-weight basis over a two-year period, average levels of essential minerals were much higher in the organically grown apples, pears, potatoes and corn as compared to conventionally produced products. The organically grown food averaged higher in calcium, chromium, iron, magnesium, molybdenum, phosphorus, potassium and zinc, and lower in mercury and aluminum. A more recent study out of Australia showed a similar difference between calcium and magnesium levels in organic and non-organic food.

Simply knowing the absolute quantity of chemical elements in a food sample may not be particularly revealing if we don’t know what molecules those elements are incorporated into in the food product. The same simple chemical elements may be organized into nutritious and flavorful molecules or may be organized into toxic, unpleasant-tasting molecules, or even into molecules that render plants more susceptible to insects and diseases. Certain amino acids such as proline have been linked to increased insect feeding and egg laying behavior. A plant slightly deficient in potassium may lack enzymes necessary to convert free amino acids into complex proteins. Another plant with adequate potassium might not show detectable differences in overall nitrogen level, but would contain more protein, might be much different in food flavor and quality, and might be much more resistant to insect attack.

It is possible to identify the specific chemical molecules that cause the typical characteristics we call “flavor” or “quality.” These generally are large, complex molecules, such as sugars, proteins, enzymes, esters, and organic acids. In a preliminary study, Dr. Franco Weibel at the Research Institute of Organic Agriculture in Ackerstrasse, Switzerland, compared a variety of parameters in apples grown under organic and conventional conditions, such as mineral elements, sugars, phenols, malic acid, selenium, dietary fiber, and vitamins C and E. Organic fruit also had significantly firmer flesh and better sensory taste evaluations. Weibel found interesting correlations between the microbial activity in the soil, a condition closely associated with organic management, and the nutritional status of the apples, especially the phosphorus level. The actual chemical soil phosphorus level had little impact on fruit nutritional status. This research also found that organic fruit was considerably higher in phenols. Plants naturally synthesize phenols for defense against pests and diseases. Possibly, the unsprayed organic plants were stimulated to make higher levels of these critical molecules in response to pest attack. These phenolic compounds that protect the plant also have been shown to be disease protectants in humans. This corroborates work done by Elaine Ingham at Oregon State University, who has shown that corn and grape plants grown in association with mycorrhizal fungi produce fruit with higher protein levels.

Research conducted at Ohio State University by Dr. Larry Phelan has shown that European corn borer insects given a choice between organic and conventional corn plants avoid the organic plants. His research is continuing to test two hypotheses for these observations. He feels that the organic soils, with a rich microbial population, may release  plant nutrients more evenly over the season, resulting in slower, sturdier plant growth that is more resistant to insect attack. He also believes that the mineral balance of the soil and the plant plays a key role in insect resistance. In either case, the levels of complex molecules and water content in the plant tissue probably determines how tasty the plant is to an insect.

We will continue this article tomorrow. 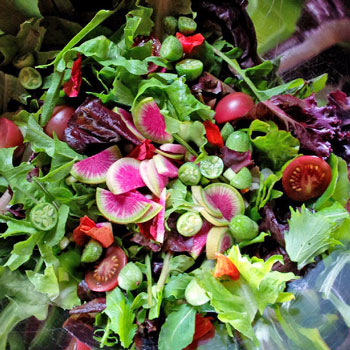 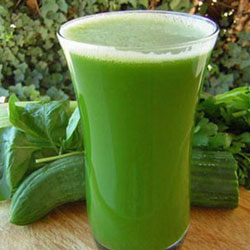 “Fat, Sick and Nearly Dead” and Your Heirloom Garden